Prostate cancer is a disease in which malignant (cancer) cells form in the tissues of the prostate. Prostate cancer is found mainly in older men. As men age, the prostate may get bigger and block the urethra or bladder. This may cause difficulty in urination or can interfere with sexual function. The condition is called benign prostatic hyperplasia (BPH), and although it is not cancer, surgery may be needed to correct it. The symptoms of benign prostatic hyperplasia or of other problems in the prostate may be similar to symptoms of prostate cancer.

Possible signs of prostate cancer include:

These and other symptoms may be caused by prostate cancer. Other conditions may cause the same symptoms. A doctor should be consulted if any of the following problems occur:

Tests that examine the prostate and blood are used to detect (find) and diagnose prostate cancer.

The following tests and procedures may be used:

Digital rectal exam (DRE): An exam of the rectum. The doctor or nurse inserts a lubricated, gloved finger into the rectum and feels the prostate through the rectal wall for lumps or abnormal areas.

Prostate-specific antigen (PSA) test: A test that measures the level of PSA in the blood. PSA is a substance made by the prostate that may be found in an increased amount in the blood of men who have prostate cancer. PSA levels may also be high in men who have an infection or inflammation of the prostate or BPH (an enlarged, but noncancerous, prostate).

Transrectal ultrasound: A procedure in which a probe that is about the size of a finger is inserted into the rectum to check the prostate. The probe is used to bounce high-energy sound waves (ultrasound) off internal tissues or organs and make echoes. The echoes form a picture of body tissues called a sonogram. Transrectal ultrasound may be used during a biopsy procedure. 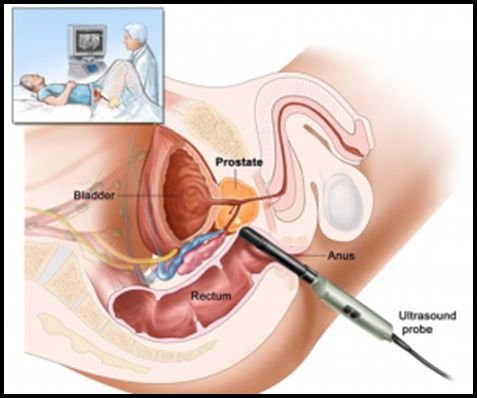 Biopsy: The removal of cells or tissues so they can be viewed under a microscope by a pathologist. The pathologist will examine the biopsy sample to check for cancer cells and determine the Gleason score. The Gleason score ranges from 2-10 and describes how likely it is that a tumor will spread. The lower the number, the less likely the tumor is to spread. There are 2 types of biopsy procedures used to diagnose prostate cancer:

Transrectal biopsy: The removal of tissue from the prostate by inserting a thin needle through the rectum and into the prostate. This procedure is usually done using transrectal ultrasound to help guide the needle. A pathologist views the tissue under a microscope to look for cancer cells.

The prognosis (chance of recovery) and treatment options depend on the following:

After prostate cancer has been diagnosed, tests are done to find out if cancer cells have spread within the prostate or to other parts of the body.

The process used to find out if cancer has spread within the prostate or to other parts of the body is called staging. The information gathered from the staging process determines the stage of the disease. It is important to know the stage in order to plan treatment. The following tests and procedures may be used in the staging processs

The stage of the cancer is based on the results of the staging and diagnostic tests, including the original tumor biopsy. The biopsy is used to determine the Gleason score. The Gleason score ranges from 2-10 and describes how different the cancer cells look from normal cells and how likely it is that the tumor will spread. The lower the number, the less likely the tumor is to spread.

In stage I, cancer is found in the prostate only. It cannot be felt during a digital rectal exam and is not visible by imaging. It is usually found accidentally during surgery for other reasons, such as benign prostatic hyperplasia. The Gleason score is low. Stage I prostate cancer may also be called stage A1 prostate cancer.

In stage II, cancer is more advanced than in stage I, but has not spread outside the prostate. The Gleason score can range from 2-10. Stage II prostate cancer may also be called stage A2, stage B1, or stage B2 prostate cancer.

In stage III, cancer has spread beyond the outer layer of the prostate to nearby tissues. Cancer may be found in the seminal vesicles. The Gleason score can range from 2-10. Stage III prostate cancer may also be called stage C prostate cancer.

In stage IV, cancer has metastasized (spread) to lymph nodes near or far from the prostate or to other parts of the body, such as the bladder, rectum, bones, liver, or lungs. Metastatic prostate cancer often spreads to the bones. The Gleason score can range from 2-10. Stage IV prostate cancer may also be called stage D1 or stage D2 prostate cancer.

There are different types of treatment for patients with prostate cancer.

Watchful waiting is closely monitoring a patient’s condition without giving any treatment until symptoms appear or change. This is usually used in older men with other medical problems and early-stage disease.

Patients in good health are usually offered surgery as treatment for prostate cancer. The following types of surgery are used:

Transurethral resection of the prostate (TURP): A surgical procedure to remove tissue from the prostate using a resectoscope (a thin, lighted tube with a cutting tool) inserted through the urethra. This procedure is sometimes done to relieve symptoms caused by a tumor before other cancer treatment is given. Transurethral resection of the prostate may also be done in men who cannot have a radical prostatectomy because of age or illness.

Impotence and leakage of urine from the bladder or stool from the rectum may occur in men treated with surgery. In some cases, doctors can use a technique known as nerve-sparing surgery. This type of surgery may save the nerves that control erection. However, men with large tumors or tumors that are very close to the nerves may not be able to have this surgery.

Impotence and urinary problems may occur in men treated with radiation therapy.

Hormone therapy is a cancer treatment that removes hormones or blocks their action and stops cancer cells from growing. Hormones are substances produced by glands in the body and circulated in the bloodstream. Some hormones can cause certain cancers to grow. If tests show that the cancer cells have places where hormones can attach (receptors), drugs, surgery, or radiation therapy are used to reduce the production of hormones or block them from working.

Hormone therapy used in the treatment of prostate cancer may include the following:

New types of treatment are being tested in clinical trials. These include the following:

Biologic therapy is a treatment that uses the patients immune system to fight cancer. Substances made by the body or made in a laboratory are used to boost, direct, or restore the bodys natural defenses against cancer. This type of cancer treatment is also called biotherapy or immunotherapy.

High-intensity focused ultrasound is a treatment that uses ultrasound (high-energy sound waves) to destroy cancer cells. To treat prostate cancer, an endorectal probe is used to make the sound waves.