What is Kidney and its normal function?

Kidneys are the bean-shaped organ present in the back protected by the lower ribs and back muscles. Their primary function is to filter the blood and thus help in maintaining proper electrolyte balance. They also help preserve hemoglobin, body calcium, and blood pressure regulation. 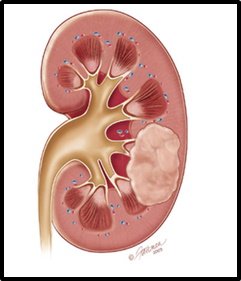 What is a kidney tumor?

The tumor is an abnormal growth of the cells. They can be cancerous or non-cancerous. Kidney cysts are the most common lesion of the Kidney; they are fluid-filled lesions and are usually benign. Solid-looking kidney tumors can be benign but are usually cancerous in 80% of cases. 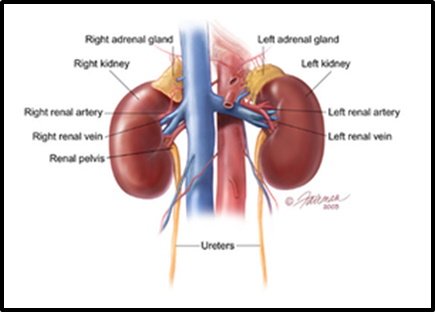 The following associations may increase the risk of developing kidney cancer:

What are the symptoms of kidney cancer?

How is kidney cancer diagnosed?

Ultrasonography is the initial test when a kidney tumor is suspected once a lesion is confirmed; further evaluation in the form of a CECT abdomen or an MRI is done to evaluate the characteristic of the tumor and its relation to the surrounding structures. Other organs’ imaging (CT/MRI) is sometimes needed to assess distant spread. Apart from the routine CBC, Urine Routine and renal function test, Chest X-ray, Liver function test is done to complete the metastatic workup.

What are the different stages of kidney cancer?

Stage I: Tumor less than 7cm with no local or distant spread

Stage II: Tumor more than 7cm with no local or distant spread

Stage III: Tumor of any size which has spread to the regional Lymph Nodes or extended into the renal vein or large vein ( IVC).

Stage IV: Tumor of any size or lymph nodes that has spread to the surrounding organs or distant organs.

What are the treatment options for tumors that appear confined to the Kidney?

The tumor is confined to the Kidney; three significant modalities of treatment exist

Tumor removal: Tumor removal is considered the standard of care for most renal tumors if feasible. Suppose the tumor is much larger than the whole Kidney and the fat covering. In that case, part of the ureter and sometimes Adrenal is removed. With the increasing incidence of diabetes, hypertension, Bilateral tumors, patients with poor kidney reserve and other diseases, there is a trend to preserve as much kidney tissue (Nephron Sparing Surgery or Partial Nephrectomy) as possible, provided it is feasible and safe to do so to prevent future renal deterioration and need for dialysis.

Open Radical Nephrectomy: Open Nephrectomy is usually performed by a flank incision around 5-8 inches long. The rib may be resected to facilitate the surgical maneuver. The Kidney with the fat covering, ureter, and sometimes Adrenal is removed after ligating the Kidneys blood supply. With a following of 5-10 years, most of the literature now favors partial nephrectomy (done in the experienced hand) has got a similar survival rate with less chance of patient going into renal compromise. Though the complication of partial nephrectomy is slightly high if done with an experienced hand is reasonable, it is now considered the surgical procedure of choice for the tumor, which can be resected with ease and safety. Partial nephrectomy is the preferred treatment when radical nephrectomy results in either immediate dialysis or high risk for subsequent dialysis, such as when the patient has a single functioning kidney, poor overall kidney function, medical or genetic diseases that threaten kidney function or bilateral kidney tumors. Not all patients with renal tumors can undergo Partial nephrectomy. It is usually not recommended in patients with tumors that have extended into the renal vein. These tumors are near the main kidney vessels or factors that would make complete tumor resection unlikely. Whenever partial nephrectomy is performed, there is a small inadvertent risk of radical nephrectomy if the tumor cannot be resected entirely or risk of bleeding or other patient-related complication ( risk of prolonged anesthesia, cardiopulmonary comorbidities).

Surgery or Minimal Invasive Surgery: A slightly bigger cut is made to remove the final specimen, which depends on the size of the Kidney and tumor. It is now considered the standard for care for removing the Kidney if feasible, as it has comparable oncological (Cancer Clearance) outcomes compared to the open technique. Not all renal tumors can be removed by keyhole surgery; massive tumors spread to surrounding organs or have extended into the body’s major vessels, or patient-related factors such as not poor cardiopulmonary reserve cannot withstand the keyhole surgery or multiple previous abdominal surgeries.

Tumor ablation: Tumor ablation treatment destroys the tumor without surgically removing it by various forms of energy ( Hot or cold). Examples of ablative technologies include cryotherapy, radiofrequency ablation, high-intensity focused ultrasound (HIFU), microwave thermotherapy and laser coagulation. It is done by either an open, Laparoscopic or percutaneous approach. No long-term studies are available as most of these techniques are new in the medical field. However, compared to standard surgical removal, the recurrence chances are slightly higher. This is more suitable for a patient who cannot tolerate primary surgical treatment or a patient with multiple bilateral tumors or small tumor recurrence.

Embolization: This is not considered the standard procedure for treating renal tumors. This is mainly done as palliative care or in combination with other modalities. Their main indication is a tumor that is actively bleeding; thus, the bleeding can be stopped by embolising the blood supply, and the physician has some time to stabilize the patient. They are also used for large tumors to make them surgically amenable. This is mainly done by injecting an embolism agent through a catheter inserted through the leg artery and is usually done under spinal in a radiology suite by an interventional radiologist.

What are the treatment options for tumors that invade the renal vein or vena cava?

Open surgery is recommended for the tumor extending into the IVC (The body’s most prominent vein). An experienced urologist with an excellent institutional setup should do the surgery. The surgery requires isolation of the IVC, extracting the tumor, and restoring the IVC. This can lead to significant blood loss and may require a blood transfusion.

What are the treatment options for tumors that have spread to other organs?

A multimodal approach treats a tumor that has spread to other organs. Traditionally there are four primary treatment options: nephrectomy followed by immunotherapy, initial treatment with immunotherapy, targeted therapy, clinical research trials and surveillance.

Radiation: Radiation does not have any role in treating primary disease, but it is usually used to alleviate the bony pain caused due to metastasis.

Surveillance: This is usually done when the probability of having a malignant tumor is low, as in Angiomyolipoma decided based on imaging findings, or the size is minimal, or the patient has a very short life expectancy due to other causes or because of comorbidities the surgical intervention carries a high risk

What can I expect after treatment for kidney cancer?

After nephrectomy, a regular follow-up is necessary, consisting of a battery of blood tests and imaging to rule out distant spread, local recurrence, or early detection of tumor in the opposite Kidney.

Kidney function: A person can lead an everyday life and has one normal functioning kidney. But in some patients with already compromised function, the risk of dialysis may be there. Patients with normal solitary Kidney in which a portion of the Kidney is removed during partial nephrectomy have a 4-7% risk of becoming dialysis-dependent and a 3.6% risk of temporary dialysis with impaired function after that. There is also a risk of hyperfiltration injury inpatient whose functioning renal parenchyma is less than half of one Kidney, which can appear after a few years. The patient needs to be on constant, regular follow-up to diagnose and treat this complication earlier.

85% of the solid tumor, which enhances on CT scan is, are cancerous. The dictum is that the solid enhancing renal masses are malignant unless proved otherwise. There is a high false-negative (6-15%) of renal biopsy, i.e., the tumor is present but reported as usual or benign on biopsy. Thus there is a high risk of missing cancers and their early treatment. There is also the risk of bleeding and injury to the Kidney’s central vascular supply needing nephrectomy apart from missing a tumor. A biopsy is indicated only when there is suspicion that the tumor has come from another organ ( Metastasis), an inflammatory mass or an abscess or a Lymph node conglomeration based on imaging findings.

Lymph nodes are part of the immune system, and the lymphatic channels carry excess body fluid from this. The fluid gets filtered in the LN. Sometimes the tumor cells get entrapped in this LN and may form a satellite lesion. The LN of the Kidney is quite variable and does not take a particular course like another system. Moreover, the hilar LN is usually removed during nephrectomy to prognosticate the patient. LN dissection is only required when there is obvious enlarged LN.

During traditional radical nephrectomy, the Adrenal was being removed with the Kidney. Of late, the literature suggests that there is no added benefit of eliminating adrenals in a tumor located in the middle or lower part of the Kidney (T1 and T2). Adrenals are usually removed only when the imaging studies suggest their involvement or are enlarged, the tumor is in the upper part of the Kidney, or if the tumor is T3 or T4. This decreases the risk of adrenal insufficiency in the future.

If the tumor is not cancerous, no further treatment is required. If the tumor is malignant most of the time, surgical removal is the complete treatment. Patients with T3, T4 tumors or distant metastasis may require additional targeted or immunotherapy after consultation with a medical oncologist.

The patient can lead an everyday life with a single good functioning kidney. Even patients with mild suboptimal function usually require dialysis but need to be under the care of a nephrologist.

The patient needs to be a little extra careful when they have a single functioning kidney and avoid collision/contact sports that have the risk of injury. Any medication consumed should be under the physician’s guidance and prevent painkillers and unnecessary use of other medicines. They need to cut down on their salt intake. The patient should have reasonable control of their diabetes, hypertension and cholesterol. And need to be under regular follow-up to detect the renal impairment early.

There are no proven ways to prevent future recurrence other than stop smoking. Patients need to be under constant medical vigil to detect any recurrence or metastasis.